Have you heard - the Olympics are coming to London, UK in 2012? Well, if you hadn't heard and you live over here you must be living under a rock because it is everywhere!


The Olympic flame arrived in the UK back in May and began a 70 day route around the country. 8000 torchbearers will carry the flame 8000 miles and visit around 1000 towns & cities.


This weekend the flame came to Lichfield. It entered the City around 9.20am before proceeding through the City and coming to the road where I was waiting at around 9.50. I was so excited when I first spotted the torch I started shouting and got everyone else jumping up and down too. If you look closely, you can see the torch in between the buses!


Getting a bit closer now (I cropped the photos so you can't really tell the distance but they do get clearer as the runner gets closer!)... 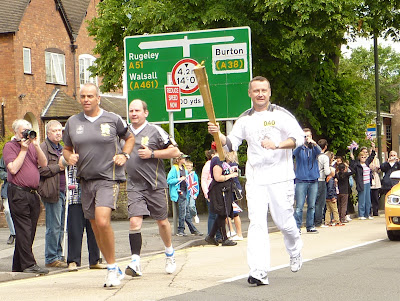 The torch bearer is James Whitford from nearby Rugeley, you can read his story here:
http://www.london2012.com/torch-relay/torchbearers/torchbearers=james-whitford-4890/index.html
Now, what you don't know about him is that he also doubles as Superhero Cardboard Cutout Man!! I don't know how this happened, but he really does look like he has been cropped and  pasted into this photo!

This bus followed the procession and had a nice surprise inside -  more torches and runners.

After the torch had passed there was plenty more to do in Lichfield, so we pootled off to enjoy some of the other activities. One of these was a classic & modern car rally - my goodness I know how my husband must feel when I drag him into a bead shop!